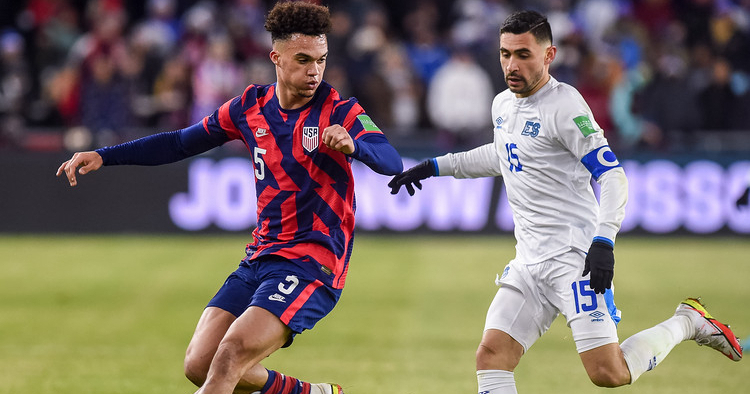 After a tough battle in Columbus where El Salvador put in a very respectable performance against an American team that perhaps should have done better, Gregg Berhalter’s young guns held their nerve and came away with a 1-0 victory.

The prize was the all-important three points that bring the USMNT a step closer to a FIFA World Cup spot in Qatar.

After the game, goalscorer and man of the match Antonee Robinson said post-game that, “we’re definitely one step closer.”

“We’re really happy to get the win,” he continued. “It was what we were preparing for” while admitting that “it wasn’t the prettiest game and there were times when we played good football and times that we just had to dig it out.”

“[There were] chances that we didn’t put away but we got the win.  We’re one step closer to our goal of qualifying for the world cup so we’re all delighted.”

The Fulham FC defender knew that despite El Salvador having won just one game so far in this final qualifications round, that the USA would be in for a battle.

“We knew we were coming off the back of everyone at different stages [of fitness]; some lads are in preseason, so lads have had a heavy fixture period, myself included, and it’s our first international game since the last window.”

“So it was never going to be [that] we turn up with the short time we’ve had to prepare and play an amazing game of football and win six nil; it was always going to be a tough, tight affair.”

The USA stuck to the game plan, kept attacking and in the end reaped the benefit of Robinson’s brilliant strike that came in the 52nd minute.  The job was far from over as El Salvador seemed to be revitalized as they pushed for an equalizer.

“They made it difficult for us,” the British-born Yank said. “They were aggressive [and] they sat tight, but we kept patient. We kept doing what was working and eventually got the goal, thankfully,  and we saw it out as well.”

“They put a bit of pressure on towards the end,” he continued. “We had to stay strong, stay resilient to keep a clean sheet and that’s massive for us going forward.”

“They’re the games we have to keep winning if we want to qualify.”

In a goal celebration that would make Arsenal’s Pierre-Emerick Aubameyang proud, after hitting the back of the net, Robinson wheeled away and showed off his back flipping skills. It would also be fair to say that many a USA fan cringed when they saw the momentary grimace on the fullback’s face when he landed.

“I don’t practice back flips anymore, it’s just one of those muscle memory things,” the 24-year-old insisted. “I’ve been doing it since I was a kid and I just know I can do it.”

Regarding the grimace, he reassured concerned fans, “The specific part of the celebration where it looked like I was injured for a minute; that was just a kind of homage to something that happened a few years ago [while] playing a friendly for Everton in Africa.”

“My friends have been on me for weeks to do that celebration, so I had to pull it out. [I] didn’t tell anyone so there were a few people scared, but it’s all part of the fun of enjoying the game for me,” he concluded with a grin.

The USA will travel north of the border to take on Canada, who currently lead the qualifying group by one point over Berhalter’s men.

Fans will be looking for another solid Robinson performance against the Canucks and perhaps even another goal, but he would be forgiven if his celebration is just a simple knee slide.

The old man of Yanks-Abroad, having been around since the very beginning in 2004, Known as the resident Belgian expert since that’s where he has lived for a couple of decades. Over the years he has interviewed Nats such as Kasey Keller, Brian McBride, Oguchi Onyewu, Jozy Altidore and Tim Weah, to name a few. When not working the day job, he can often be found in stadiums around Europe, watching games from the top flight to the lower leagues. To prove that he is not just a pretty face, Mike received a Bachelor’s Degree from the University of Maryland and a Masters from the University of Oklahoma. Boomer Sooner! On a non-soccer note, Adubato has just released a book of poetry from his travels, Missing the Exit, published by Broken Keys Publishing in Ottawa, Canada. So that must make him the YA poet laureate! You can grab your copy on Amazon.com, order online and pick it up and Barnes & Noble or get an e-copy at various outlets.

We want to win the first game: Weston McKennie